When asked if he wants a piston ring set with moly, chrome, or cast iron faced top compression rings the mechanic often returns the question to the jobber salesman by saying, “What should I use?”

There is some confusion in the trade as to what type ring set should be used. Hastings would like to offer some suggestions to help the consumer make the proper decision for his particular application.

The single most important factor to be considered in selecting the proper top compression ring face coating material is the service requirements the engine will be operated under. Will the engine be subjected to unusual speed or load operation, stop and go – short trip driving, or operating in a high dust or dirt environment? if, for example, the vehicle is a passenger car operated by family members for what could be termed the average driver, it really doesn’t matter which type is selected from a standpoint of the life of the engine and piston rings. On the other hand if one of the above mentioned conditions is going to exist on a regular basis then no doubt one type of ring face coating will be more appropriate than the others.

The three popular types of top compression ring face coatings, chrome, moly, and cast iron, each has advantages of its own with respect to operating conditions. Moly has a very high resistance to scuff. Chrome has good resistance to scuff but does not exhibit moly’s oil retention capabilities. Plain cast iron is a durable wear surface in normal operating conditions and is less costly than the moly or chrome faced ring.

When faced with continuous high speed or severe load conditions, the engine will be subjected to long periods of high temperatures. Moly is then a good choice because of its scuff resistance. Moly, which is an acronym for molybdenum, inherently is quite porous in its applied state which results in excellent retention of oil in the face of the ring. Moly also has the highest melting point of the three popular face coatings which results in its capability to live better under more severe operating conditions, or more specifically to resist scuffing and scoring.

In a dusty environment such as gravel pits, sand or rock mines, or operating on a dirt or unpaved roads, chrome is the best choice. As mentioned earlier, moly because of Its porosity holds oil on the O.D. face of the ring which helps inhibit scuffing. Pores on the material also can serve as a trap for foreign materials, however. Because of the incoming air/fuel mixture probably will contain some abrasive contaminant in a dusty environment, chrome with its smoother O.D. surface is a logical choice. Chrome’s extreme density and hardness resists the Impingement of dirt Into the face of the ring which accelerates cylinder wear, and actually contributes to the exhaust gases carrying some of the airborne contaminant out through the exhaust system. Chrome has more resistance to scuffing and scoring than cast iron but somewhat less than moly.

All in-all when the engine experiences normal driving conditions and is properly maintained with respect to oil and air filter changes, any of the three coatings functions equally well. It is the installer’s expert judgement in analyzing the primary use of the engine that should lead him in a direction of which ring set will be the best possible choice for that particular customer’s engine. 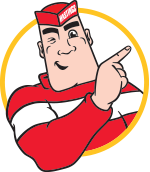